I got my “secret box” from Motorola and I unboxed it and had a chance to do a first impressions. I think it’s an awesome little phone so far!
Thank you to Audible for making content creation possible! Visit http://www.audible.com/erica for you free book.

The Xperia Z4 should be out soon. But in the meantime, I decided to take a look again at the Xperia Z2 and Compare it to the Z3. Which one will you go for? Z4, Z3, or Z2?

http://www.Patreon.com/EricaGriffin I am releasing my Patreon Campaign to the world, hoping to progress my channel and better interact with those of you who really want to support my content!

I am back from London. I attended the Ubuntu Phone Insider event and have an Ubuntu Phone I took back with me. Here is what think about the device and the OS. 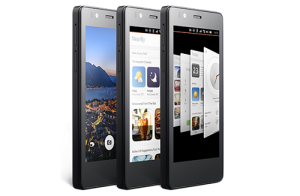 So, I attended the Ubuntu Phone Insider event in London for the unveiling of the first official Ubuntu Phone.

The device is a very modestly speced Aquaris E4.5 unit that was previously made for android. The capacitive buttons were since removed. The unit now looks quite plain with a modest 4.5 inch display. It is not HD resolution. The resolution stands at 540 x 960 and 240ppi. The display doesn’t look terrible and it is touted as an IPS display but the angles aren’t all that good.

As for what I can see with performance, I think that the OS is nice and unique but the hardware lacks oomph to make it the smooth experience that I would like to see. The camera struggles in many lighting situations and video can’t reach a steady frame rate. Not sure if these things can be fixed.

For now, it feels like simply a developer phone for those who really care about the platform. This device is not app centric and there aren’t many apps to speak of currently. Canonical is relying on Scopes to gather daily needed information for the user and hopes that the rest of the ecosystem will fall together over time.

The idea will be to eventually make an Ubuntu Phone with full desktop support so that users can converge their workflow onto one simple device.

Canonical does not plan to make this device able to dual-boot with Android like was shown with the failed Ubuntu Edge. In fact, this device happens to be none of the things that got me excited about the Ubuntu Edge so I am really hoping to see some improvements in the future.

http://www.bq.com/gb/ubuntu.html ONLY AVAILABLE IN EUROPE.

This device will not make it to US markets. As far as I can tell, the unit does not have the needed bands to work on US carriers, with one exception. It looks like the device can work on AT&T’s 850MHz band for 2G GSM speeds, I will be testing that out ASAP.

I will sit tight and watch to see if Mark Shuttleworth’s vision comes to fruition. I do see a lot of promise but the project is far in it’s infancy in comparison to the mainstream heavy hitters such as Android and iOS. The Ubuntu Phone is a non-competitor at this point but is still an interesting option.