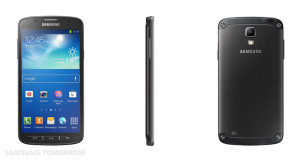 As many of you know, I am working on my hour long, in-depth Galaxy S4 review, where you can learn everything that you could possibly want to know about this device! I have both versions to look at and that review will be released soon. BUT…

Something else now has caught my eye. The Galaxy S4 active is WATERPROOF and essentially a ruggedized version of the Galaxy S4. People have been going wild over the water and dust proof capabilities of the Sony Xperia Z. Fanboys constantly blow the waterproof ability in my face on any video I post about a Samsung product because – mine is weak blah blah blah. Well, Sony fans, you can now battle the Samsung fanboys over who copied who. “BUT Sony had a waterproof phone first! Therefore Samsung is copying Sony! They should sue!” Eh, it doesn’t work that way. This market is smartly moving in the direction of phones that can withstand the toilet.

So, not only is this phone IP67 certified for both dust and water (3 feet for a half hour), it also has a 5.0 inch 443 ppi 1080p TFT LCD SCREEN (more on this on a moment), LTE, Android 4.2.2, 2GB RAM, Snapdragon S600 clocked at 1.9GHz (no Exynos version), 4 Krait 300 CPU cores, Adreno 320 GPU probably clocked at 450MHz, 16 GB internal storage (11.25 for all system data – AND better than the 9GB currently free on the S4), an SD card slot, 2,600mAh battery, and 3 colors out of the gate: Orange Flare, Urban Grey, and Dive Blue. It also has the IR blaster to change TV channels and an 8 megapixel camera (will include an Aqua Mode for underwater clarity) that I would not be surprised if existed in the Note II. The Note II camera was nothing to snuff at.

For me it is a dream come true! I know this phone is probably NOT going to be able to withstand drops any better than the original S4, but finally I can take my phone into the shower! It’s brilliant! Note: You must keep the ports closed and back cover sealed to keep it water and dust tight. Technology has finally infiltrated every shred of my existence. I am waiting now for dream invasion of some sort where I can play Angry Birds in my sleep.

The biggest thing for me is that even though I like Amoled displays, I am a heavy texter! VERY HEAVY. For the mobile business person / road warrior, amoled dislays are NOT FOR YOU! I end up with blue pixel burn in on ALL of my amoled devices within several months. I ended up with pretty gnarly burn in on my Note II display that eventually interfered with my video watching and game play. The lines of the text boxes/keyboard are permanently burned into the display. Any time an image wisps over theses areas of my display I can see these terrible ghostly lines in the background of the image. >=(

Such a thing is NOT a problem with LCD displays! It is a far more mature technology that does not consist of organic light-emitting diodes, which, simply put, are like little LED light bulbs and will eventually burn out! Blue pixels, being of the highest energy burn in the fastest. Red and green last much longer; yet, unless you plan to be looking at solid yellow (red and green only) you will be effected by the blue pixel burn in.

LCD pixels do not emit light by themselves. An LCD panel receives its light from the backlight behind the display; so, unless the backlight burns out or the transistors, which control the pixels die, you won’t have any strange pixel anomalies. LCDs also boast a longer life cycle than amoled, so even if the display/backlight was to eventually wear out, it would take a very very long time. Let’s say several years to see noticeable wear and tear (if you don’t end up with dead pixels/transistors, which does and can happen) vs 6 months for the Note II amoled display to severely burn in!

This 1080p display will be something like the one that we see on the HTC One, and with Samsung being Samsung, I am sure they will do their best to make it look saturated (may not be a good thing if they over-do it). This really may be the perfect thing for someone like me. I want a phone that can withstand my usage no matter where I am and I want a phone with a gorgeous display that won’t burn in!

BETTER BE MORE THAN 16GB VERSION:

Also, IT COMES IN ORANGE! I LOVE ORANGE! It has quite a different look to the S4, though it has the same thin bezel. The buttons are not capacitive on the front of you would not be able to use them under water. Now if I could only get it in the 32GB variant. I am happy it has over 2GB more than the original S4, but come on. Who are they fooling? I already released a video about how 16GB is simply not enough for a phone!

Overall, I am sure that it will deliver a similar experience to the original S4, though I am hearing reports that this version does not have the dual-recording function. I just hope this is not a hardware limitation. Expect to see this guy some time this summer, though the London press conference is on June 20th.

HI! My name is Erica Griffin. I am known on the interwebs as The Technology Nerd Who Likes to Film Stuff. I create insanely in-depth technology reviews as well as blog my experiences about what it is like to incorporate them into everyday living! I am from San Diego, CA. I went to the University of California, San Diego for my bachelors degree in Cognitive Science (I studied brains and hormones and why people do what they do). I specialized in Human Computer Interaction. Then I minored in Digital Media Production. Mix that all together and you get THE TECHNOLOGY NERD WHO LIKES TO FILM STUFF hehe. I love my boyfriend, François Simond, aka Supercurio, from XDA. He means everything to me and has been so supportive of me through all this! I love tech (obviously), I like to sing, I like to make origami models, I love to travel, I believe in Jesus Christ as my Lord and savior.... View all posts by Erica Griffin

10 thoughts on “Galaxy S4 Active and Why I Want One”